Wimbeldon, the oldest tennis tournament in the world, is as steeped in cliche as it is in rich sporting history. But how much do you know about this tournament? You can answer all the questions about Wimbeldon in this tricky Wimbeldon quiz. 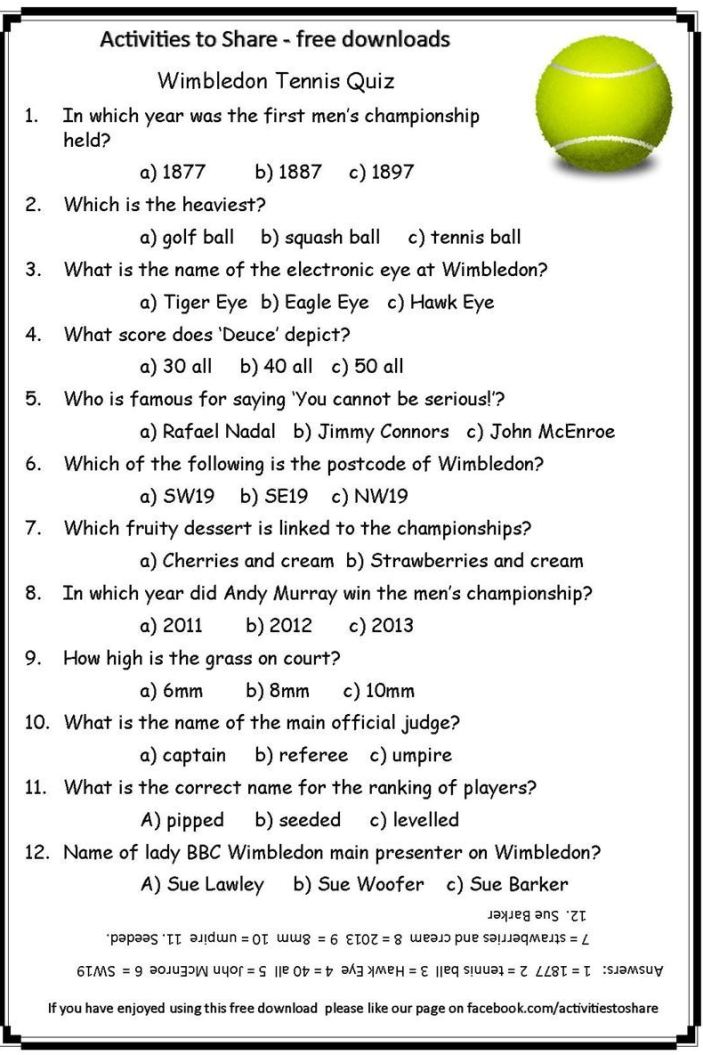 The second one is about Rufus. So, who is Rufus? The first option is the Hawk Eye computer or Radar Universal Focal Undulator System. The second option is Rufus the Racket, the official 2015 tournament mascot. The third option is the resident hawk, for deterring the local pigeons. The fourth option is the mysterious man in the Stetson hat who sits in the players box.

The third question is about when did Serena Williams win the first of the five Wimbeldon singles title, and who did she beat in the final. The A option is 2000 vs Lindsay Davenport. The B option is 2002 vs Venus Williams. The C option is 2004 vs Maria Sharapova. The D option is 2006 vs Amelie Mauresmo.

The fourth question is who beat Jimmy Connors to be the oldest men’s champion in the Open era (the record which still stands) in 1975? Is that someone named Arthur Ashe, Rod Laver, Ken Rosewell, or Ilie Nastase?

The fifth one is about the grass. To what precise length is the grass on Wimbeldon courts mowed? The first option is 1mm. The second option is 5mm. The third option is 8mm. The fourth option is 1.2cm.

The seventh one is which player won the men’s double title nine times between 1993 and 2004? The options are Todd Woodbridge, Bob Byan, Mark Woodforde, and Mike Bryan. So, who do you think won that title?

The eighth is about the speed. Who holds the record for the fastest ever serve at Wimbeldon? The A option is Grey Rusedski. The B option is Mark Phillipoussis. The C option is Ivo Karlovic. The D option is Taylor Dent.

The ninth one is who has reached the most men’s singles finals without winning the title? The first option is Jim Courier. The second option is Jimmy Connors. The third option is Pat Rafter. The fourth option is Andy Roddick.